The following is a transcription of a History of AA in Greensboro as prepared in 1967 by an early member. Every attempt was made to preserve the original integrity of the document, including the editor’s note at the end.

“Alcoholics Anonymous came to Greensboro on Thursday night, June 20, 1946, when the first meeting was held in the home of William H. (Bill) H. (2). Nine persons were present, five from Greensboro and four from out of the city.

Of the nine persons attending that initial meeting, five are still living and four are dead. Not a persons is living in Greensboro Today who attended that first AA Meeting. A technical exception to this is Bill H.’s widow, wo still lives here. But as a non-alcoholic she did not sit in on the meeting.

Shortly before this Bill has spent a period of time in a “recovery” home in Winston-Salem, N.C. While there he heard of AA and attended some meetings in the Twin City. It was through his efforts that AAs from Winston-Salem and Charlotte came to Greensboro that June night in 1946 and launched the Alcoholics Anonymous movement here.

But for the thoughtfulness of Bill and his widow the real history of the beginning of AA here might not be known today. Bill had a little black notebook in which he jotted down in AA fashion the names of the nine persons present. After his death his widow preserved the little black notebook and made it available when decision was made to write this history

For that first meeting Charlie B. (3), now of Asheville, Cy McC. (4), now of Florence, S.C., and Hughes M. (Red) R. (5) came over from Winston-Salem. From Charlotte came the man who probably first brought AA to North Carolina when he came down from New Jersey — Dave R. (6), who now lives in Richmond, Va.

On the local scene Bill had invited a number of acquaintances but only four showed up. The others stayed away, fearing Bill was going to read them the riot act about their drinking. Of those who did come, one did not know he had been to the meeting until three days later. He came “fortified” for the occasion.

Secrecy surrounded that first meeting. A talk was heard, probably made by Dave R. (6). The collection totaled $9, thanks again to Bill’s (2) little black notebook. It was decided to meet at the YMCA since regular meetings in a home would attract unwanted attention. The Y was able to provide space on Tuesday nights. These Tuesday night meetings have continued since, making Central Group’s Tuesday night the original meeting for Greensboro.

Bill (2) and the small group gathered around him had a rough time trying to convince other drunks to give AA a try as they had no clear explanation of why it works or proof that it would work. Progress was slow but sure. Some came once or twice, then stumbled back into the gutter. Of these, some came back to try again – and succeeded – others did not.

Anonymity really was stressed in those days. Some heard of AA and wanted to attend but had difficulty in even learning where meetings were held, much less who were members. At that time, the public at large knew little about AA and cared less. To them it was just another bunch of drunks getting together to raise hell at one spot instead of spreading it around the city at this beer joint or that bootlegger’s house. It just didn’t raise a lowly drunk’s standing in the community to have his name connected with AA at that time.

Members and invited guests and some who were “brought” listened to out-of-town speakers. They put in the collection plate what they could, paying their own way and not seeking outside help.

Members had little way of “selling” their new way of life to the public. Few persons would really believe the drunks had quit drinking. Their public relations policy then – as now – was based on attraction rather than promotion. By continually appearing in public sober they did more to impress those who knew them than all the words the once hopeless drunk could muster. And people began to be sold on the fact that something WAS happening in Greensboro’s drinking circles.

The Central Group met at the Y for about nine months and then moved to the third floor of the old Odell Hardware Co. Building at 322 1/2 S. Davie St., remaining there until September 1949. While here a Sunday night discussion unit was formed and a Friday night meeting started. These are the three units of the Central Group. Greensboro now had three meetings a week, the Friday night session being open to the public.

Meanwhile, the wives of AA members had been busy and on April 10, 1949, the Auxiliary to the Greensboro AA was formed. After first meeting in homes, they moved to St. Andrews Episcopal Church on West Market Street. This preceded the founding of Al-Anon Family Groups which now are spread throughout the world.

Eventually some members left Central to form the Fisher Park group. They met in the old Charlie Hudson home on North Greene Street where the First Presbyterian Church Sunday school building now stands. They moved into this building when it was completed, having met in a house across the street while construction was in progress. the rejuvenated group still meets there.

The Dogwood Group next was formed. Initial meetings were held in a home in Starmount before moving to First Moravian Church on Elam Avenue. Then came the O. Henry Group at Holy Trinity Episcopal Church on West Fisher Ave.

By this time the citizens of Greensboro no longer were taking Alcoholics Anonymous lightly. Respect for AA was growing at a rapid rate. Other groups sprang up, some later falling by the wayside or merging with stronger units.

Today there is a meeting every night of the week, with two on Tuesday, two on Friday and three on Saturday. Three years ago, there was no Saturday night meeting here.

All groups meet at 8 p.m. Some meetings are open to the public, others are closed.

An Al-anon Family Group meets on Tuesday night at Presbyterian Church of the Covenant. This was formed in 1954 and is in addition to the AA Auxiliary which meets on Wednesday night at Central.

An Alateen Group was organized in 1961 and now meets at First Presbyterian Church on Tuesday nights.

In February 1960 the various groups of the city formed the Inter-Group Council. This is composed of a representative (and alternate) from each group and serves to coordinate AA activities in the city.

Inter-Group Council provides an AA telephone answering service. The alcoholic who cries for help night or day can get the help he needs by dialing the number listed in the telephone book under “Alcoholics Anonymous.” The call will be relayed to and AA member who will go [to] the address and seek to help the sufferer. This help will be from one who understands what the sick man or woman is going through because he has traveled that same road, suffered the same agony and misery – and loneliness. Those who come to AA need never be lonely again.

This is the work that is being done to rehabilitate alcoholics in the City of Greensboro by the alcoholics themselves and at no cost to the taxpayers or anyone else. Hundreds of citizens have been and are being restored to a normal place in society through the AA program. They are the ones who honestly want sobriety and who thoroughly follow the AA path.

This is the history of the first 21 years of AA in Greensboro. In reality, it is a prologue, for new history is made daily in Greensboro as recovered – never cured – alcoholics carry the message of hope to unfortunates who still suffer and who want to do something about his or her drinking problem.

(Editor’s Note: Every effort has been made to make this history as accurate as possible in the absence of written records to refer to. Certain minor corrections have been made since the history was read at the 21st Anniversary Meeting on June 4, 1967, at First Presbyterian Church. It is possible that other minor discrepancies may be contained herein in which case the writer regrets he was unable to determine such prior to this writing. R.H.S.) “ 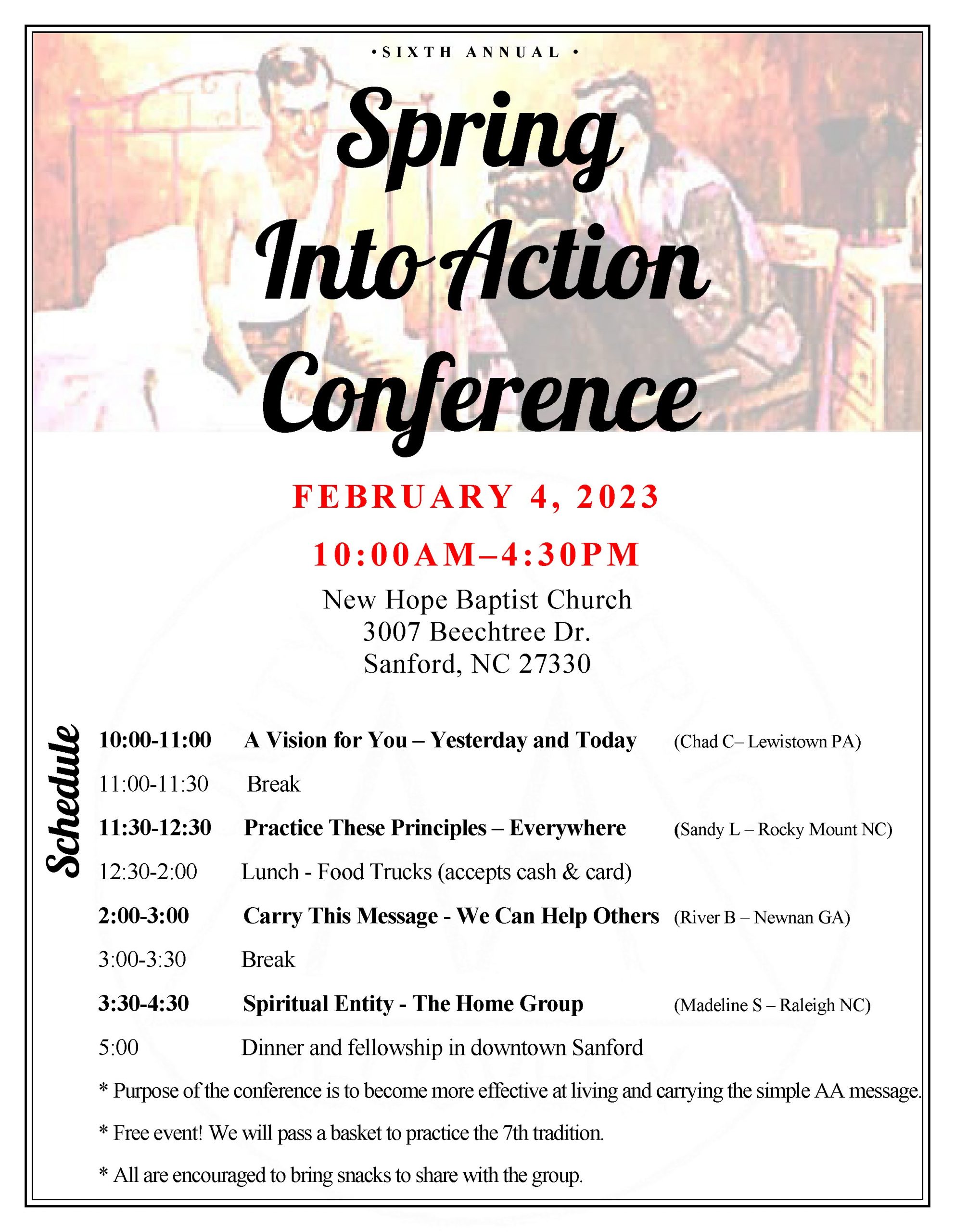 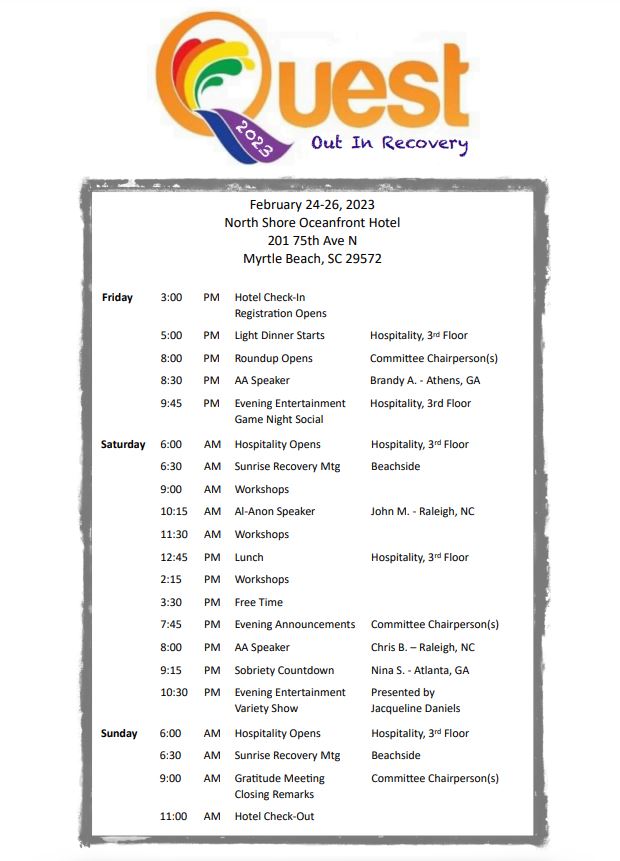 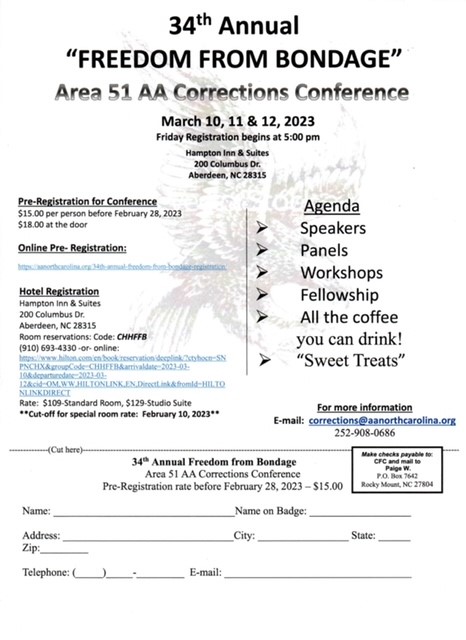 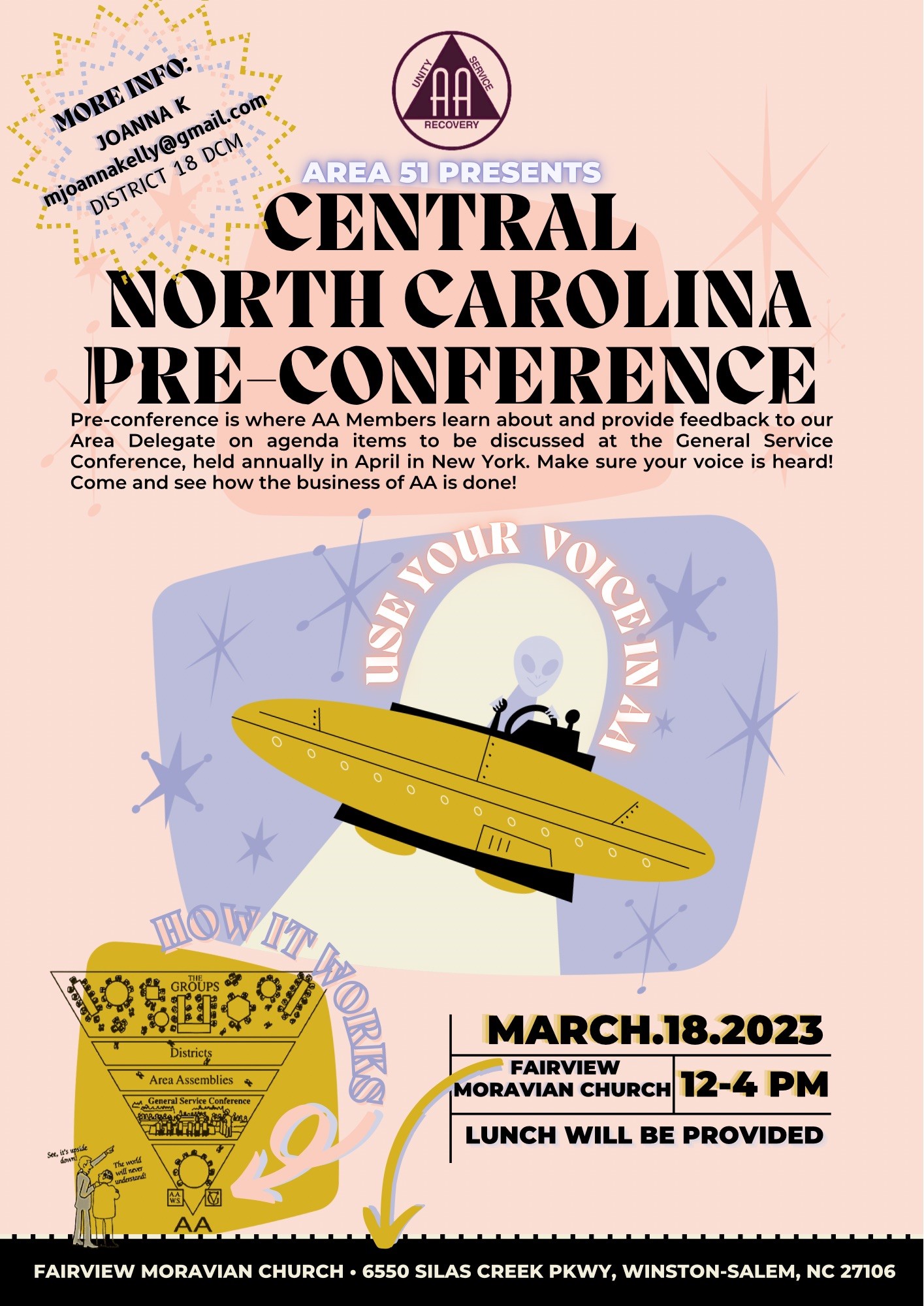